With all of our other summer fun going on, we've gotten off to a slow start.  We only got 4 days of school done in the last 2 weeks, but that's the whole point of schooling year round, so we can be flexible with our schedule.  We finished up Unit 1 & began Unit 2.

In our Bible time, we finished discussing persistence and Proverbs 2:3-5.  We began memorizing Proverbs 11:2 and have had many discussions on what humility is and why we need to be humble instead of prideful.

In history, we've continued learning about Christopher Columbus.  For one of our projects, we used a balloon to be the earth, and Samuel labeled index cards with the continents and oceans and then put them on the balloon in their proper places.  We then checked his work on our globe.  He did a great job of getting them in the right locations! 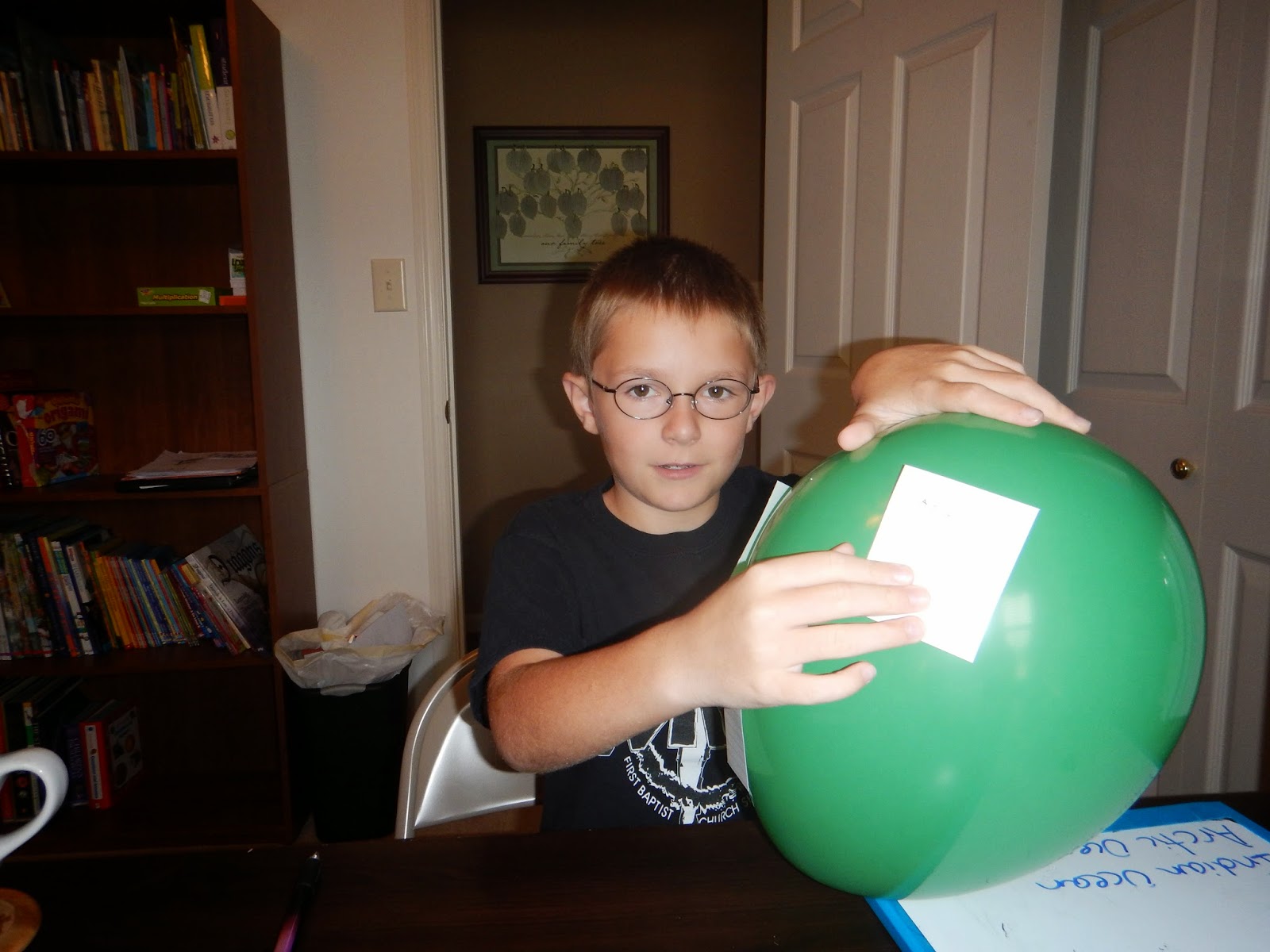 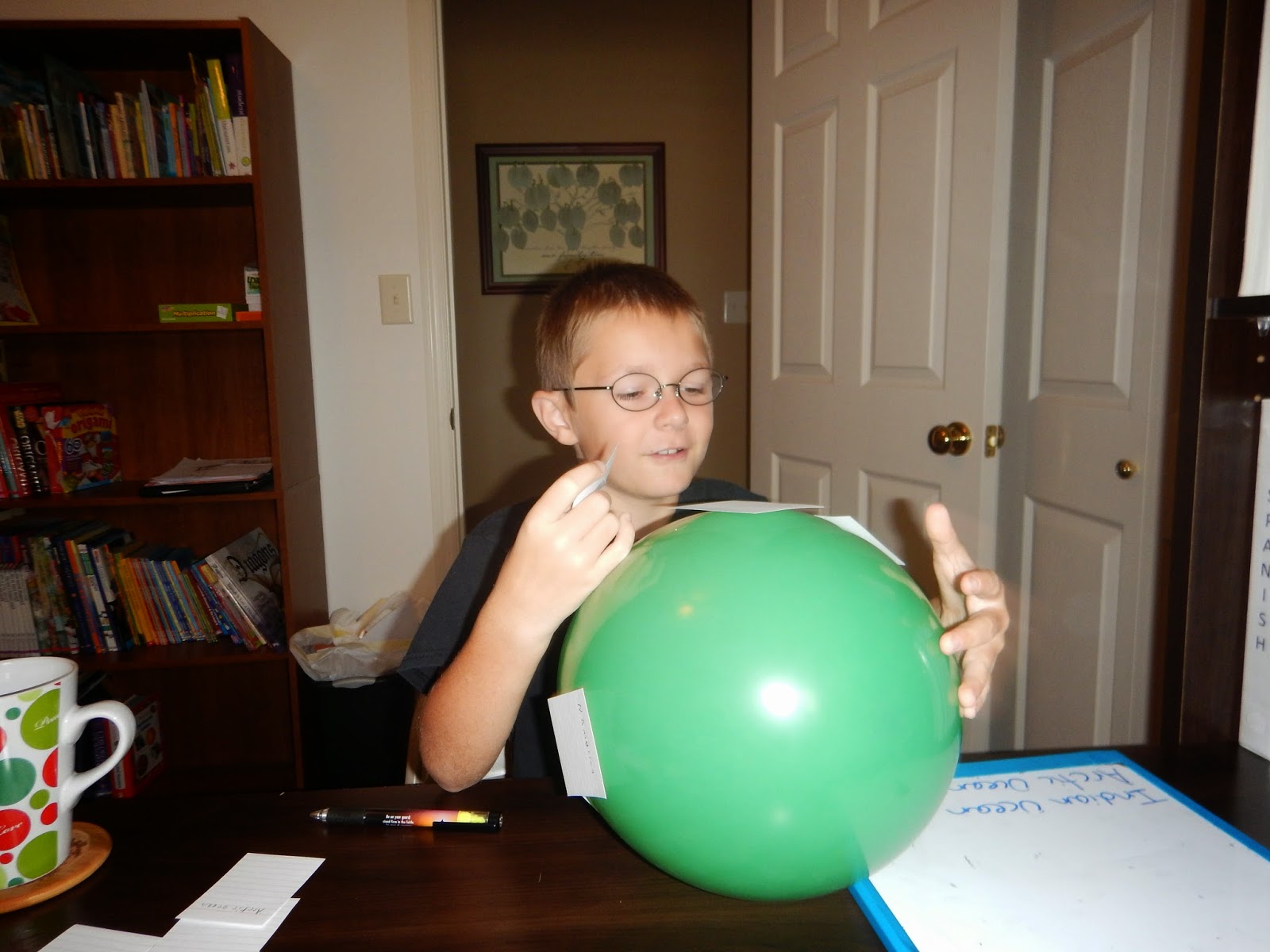 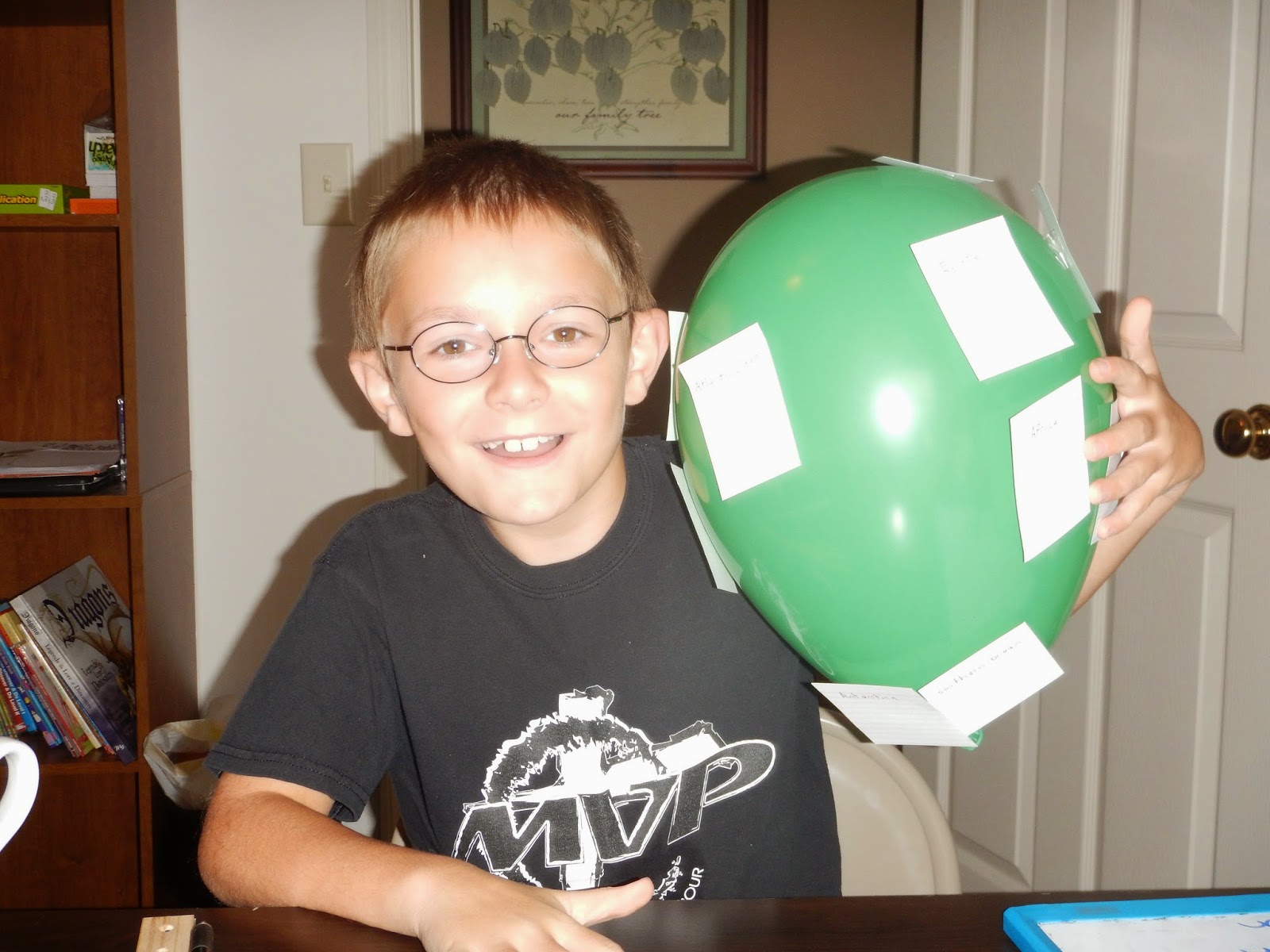 On another day in history, Samuel copied a map of Columbus' travels from one of his books. He took his time trying to get it exactly right.  He did a great job! 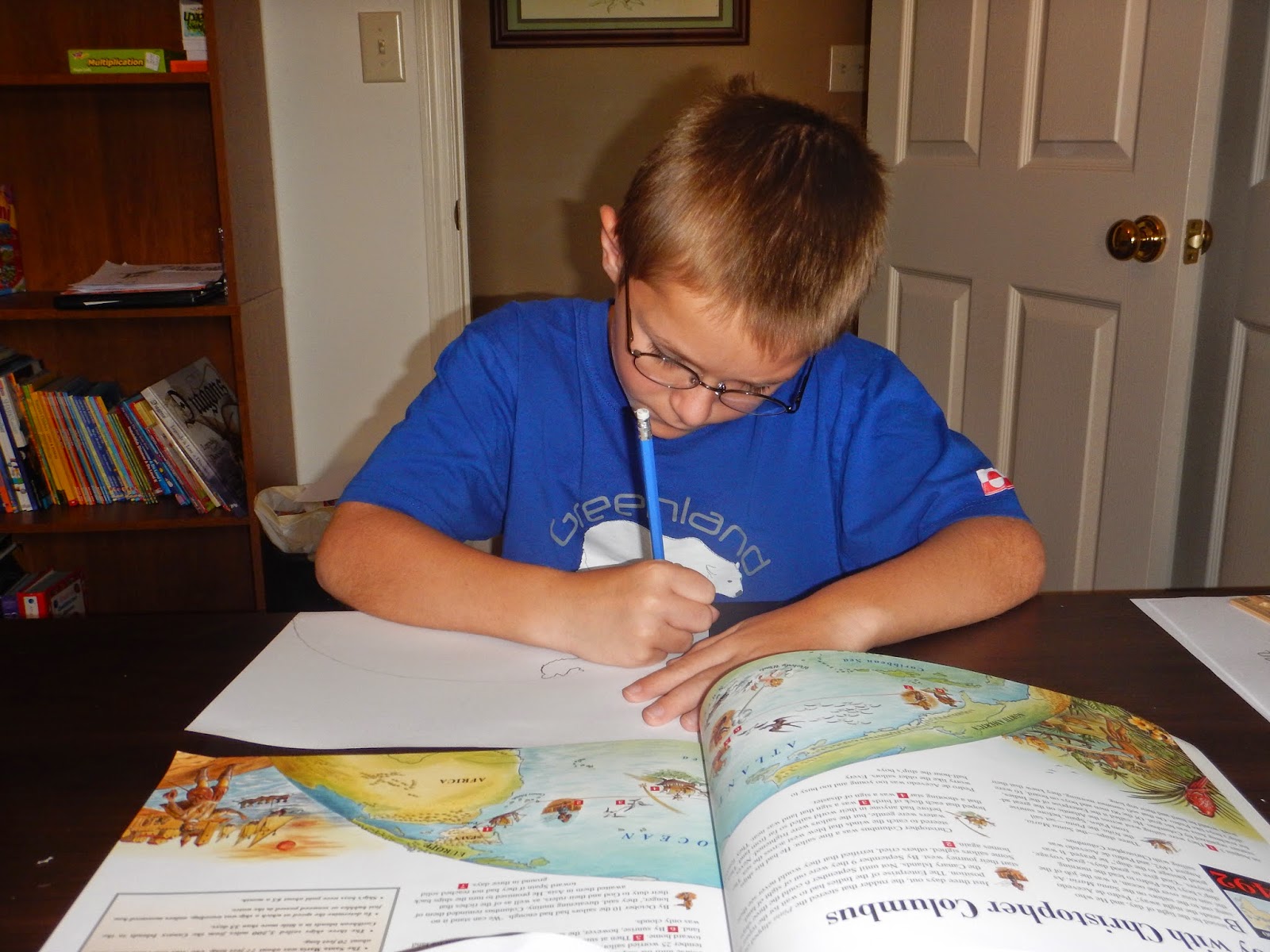 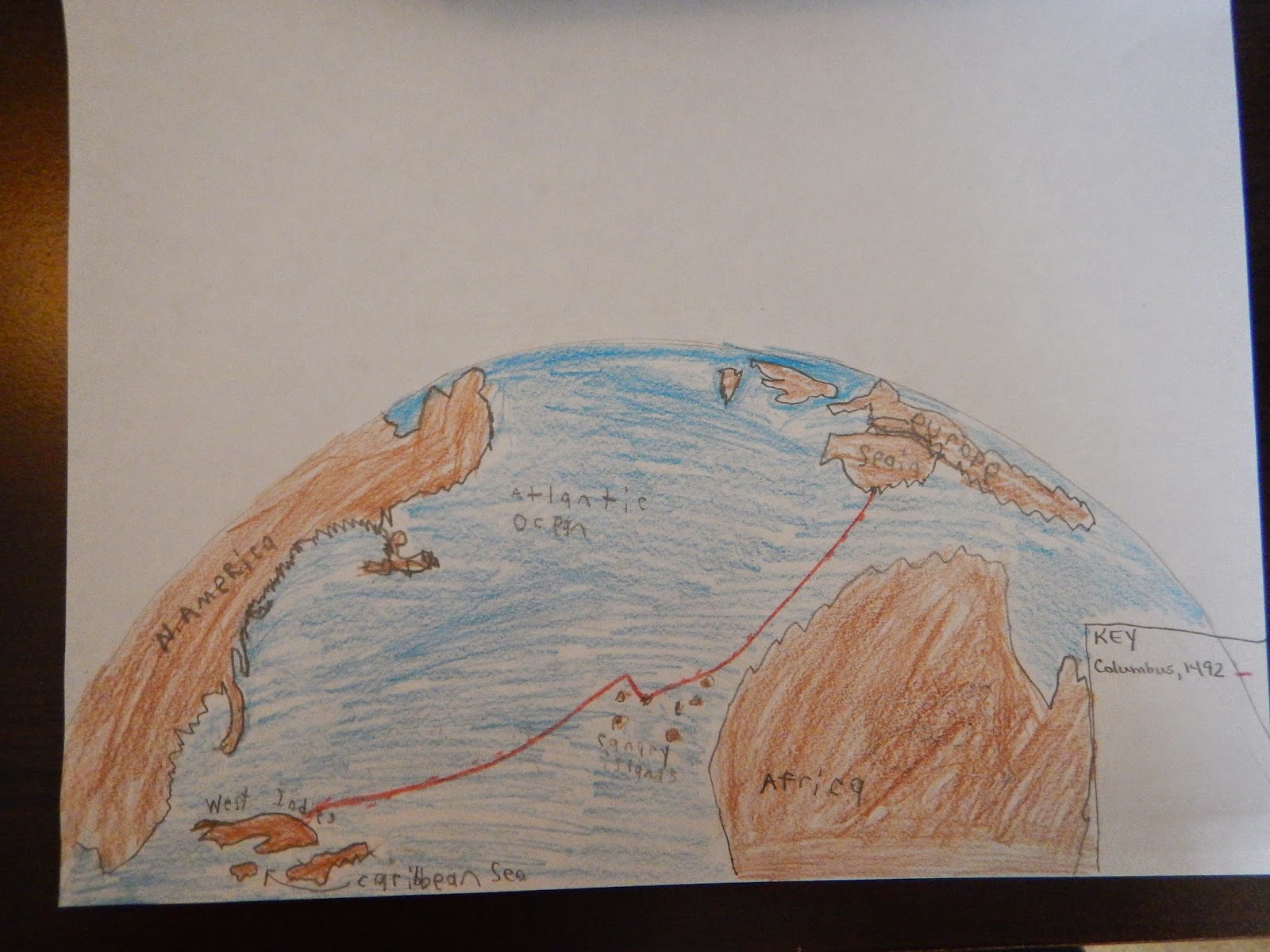 In storytime, we've continued reading about George Rogers Clark.  Samuel is really enjoying this book.  He has also been enjoying the daily poetry readings.  I'm glad he likes it, and it is something I would have never thought to add in on my own.  He takes his time each day on his copywork so he can get the poem written exactly right. 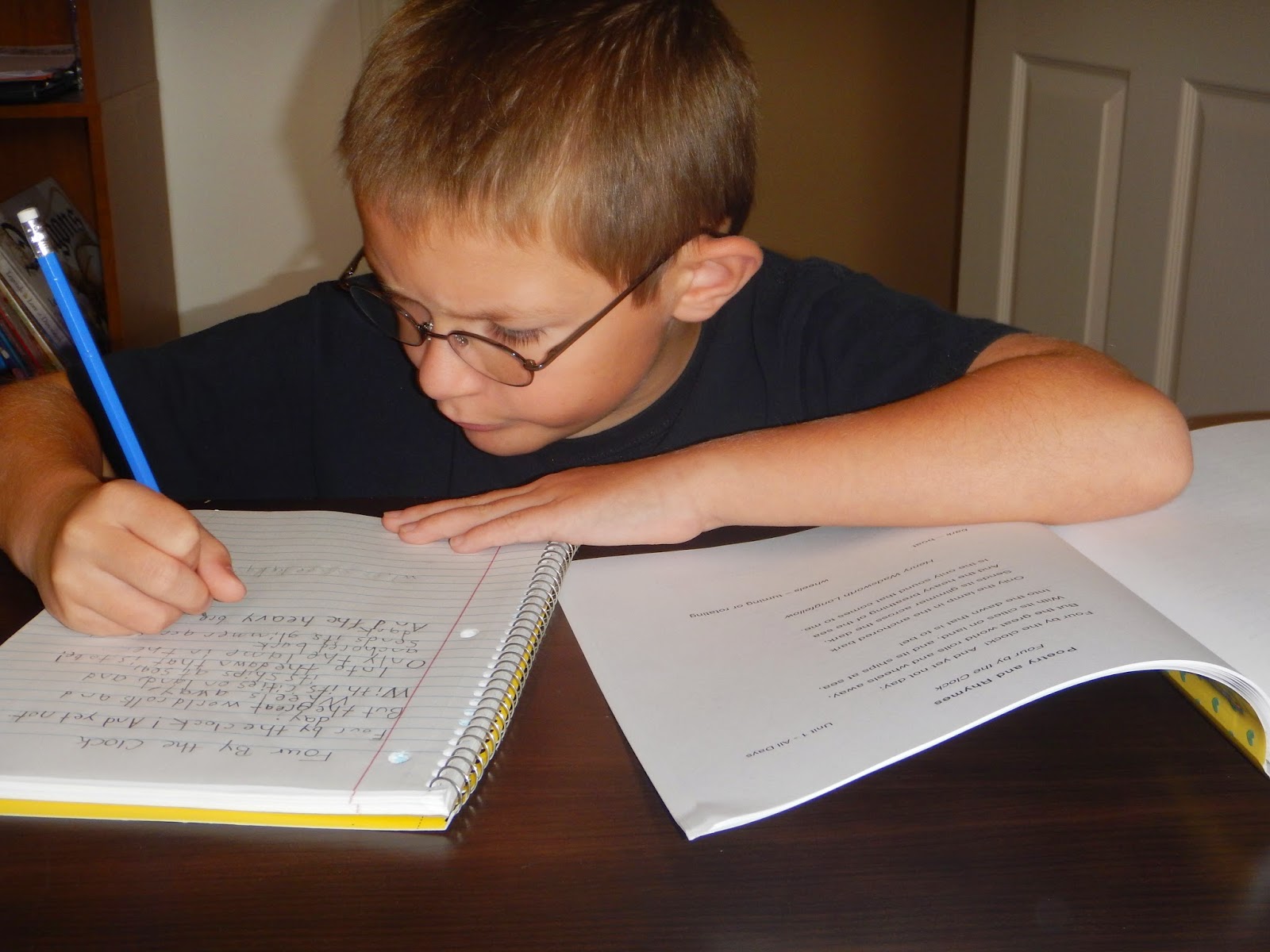 In science we are continuing to learn about the seashore.  We did an experiment one day to show how waves are caused by the wind.  He liked turning the hair dryer all the way up so he could make "monstrous waves". 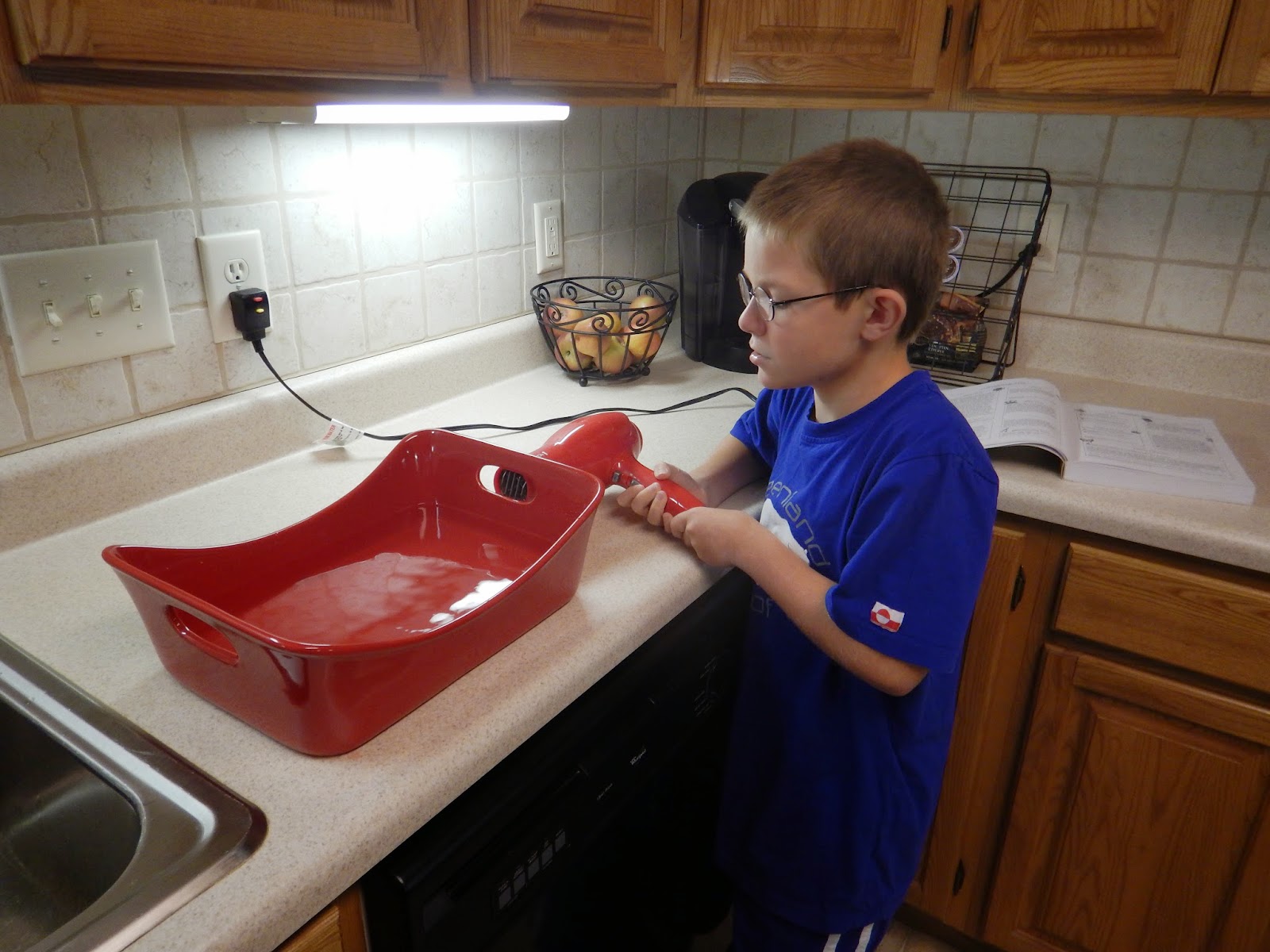 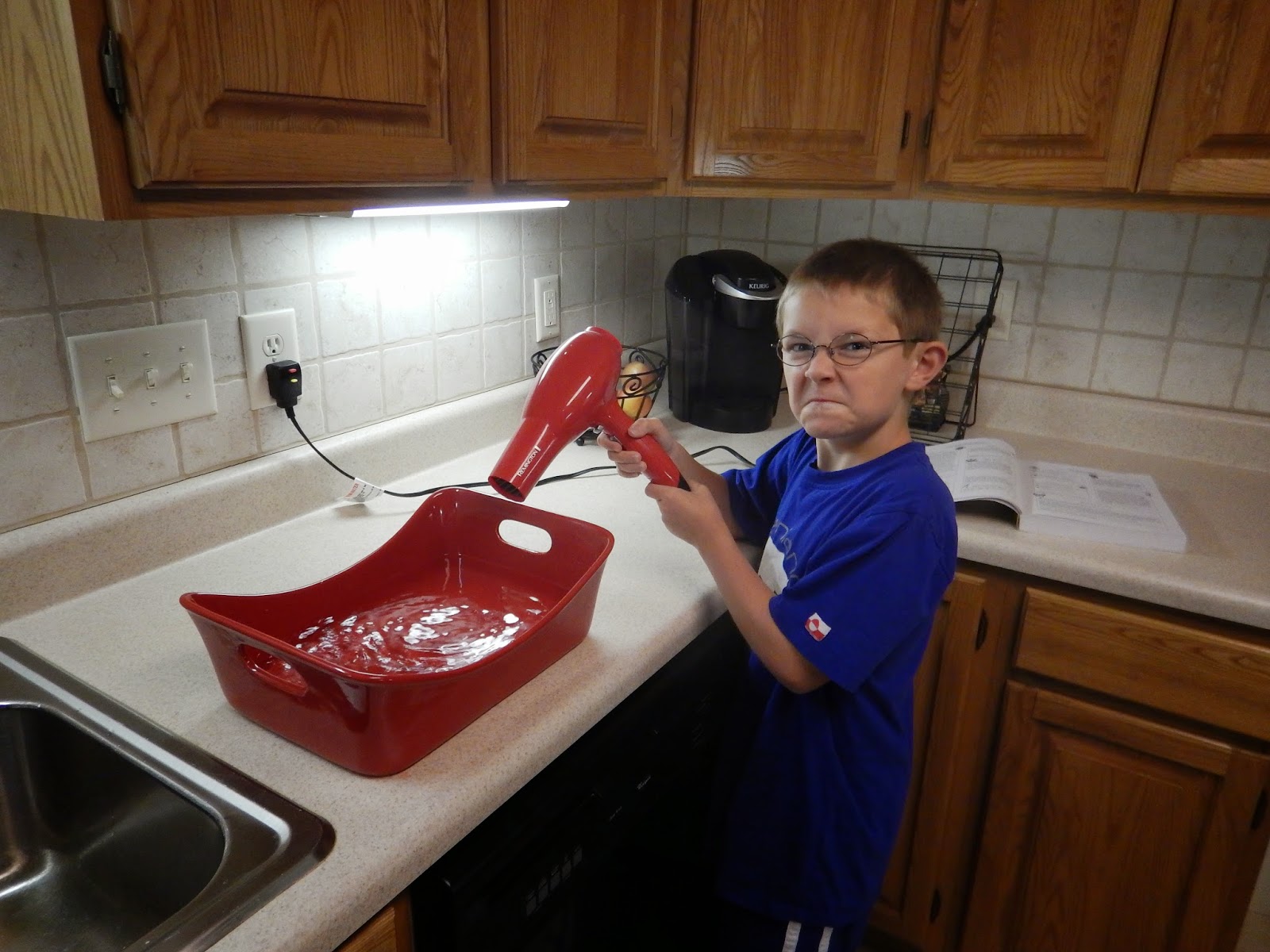 For his science notebook, he made a notebook page with Genesis 1:10 and then copied pictures of animals from his book.  He was supposed to copy animals that live on the shore and between the tides.  I misread the directions and had him copy from the wrong page for his between the tides animals, but he spent so much time on it, I didn't want to make him redo it. 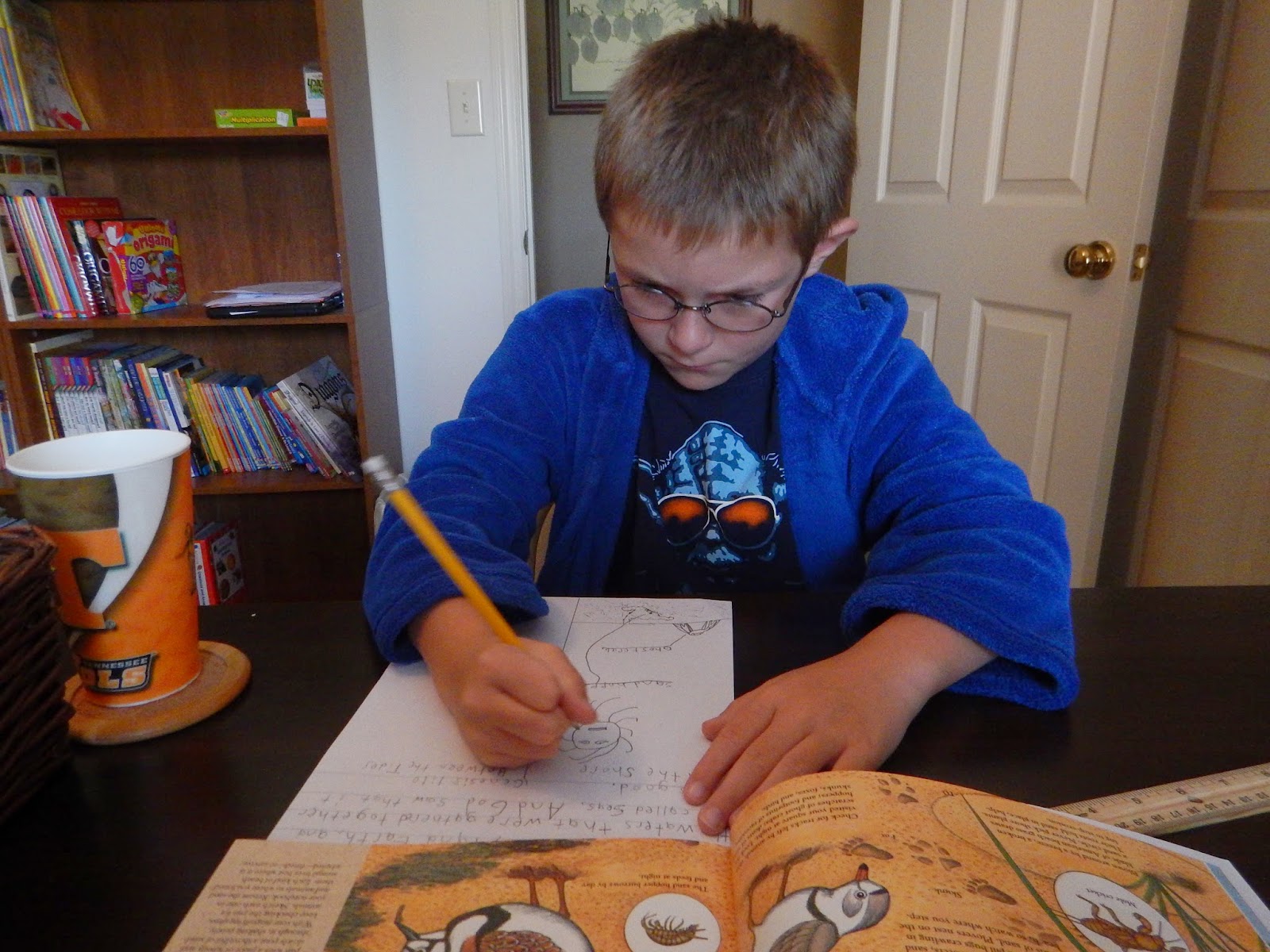 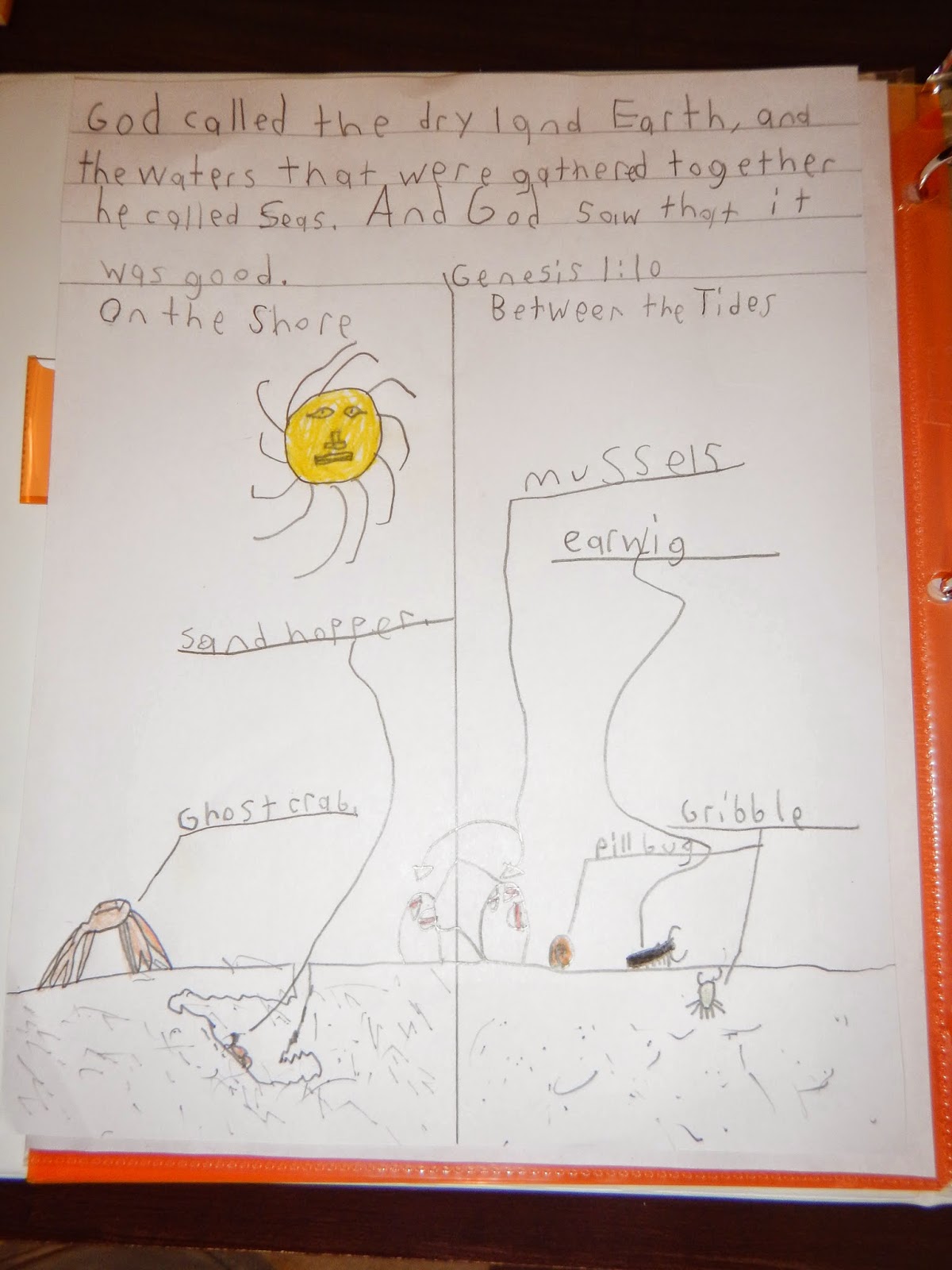 Finally, for DITHOR, he finished reading Catwings and began working on his book project.  For his project, he had to draw pictures from the beginning, middle, and end of the story and then use props to retell his story.  He did a great job! 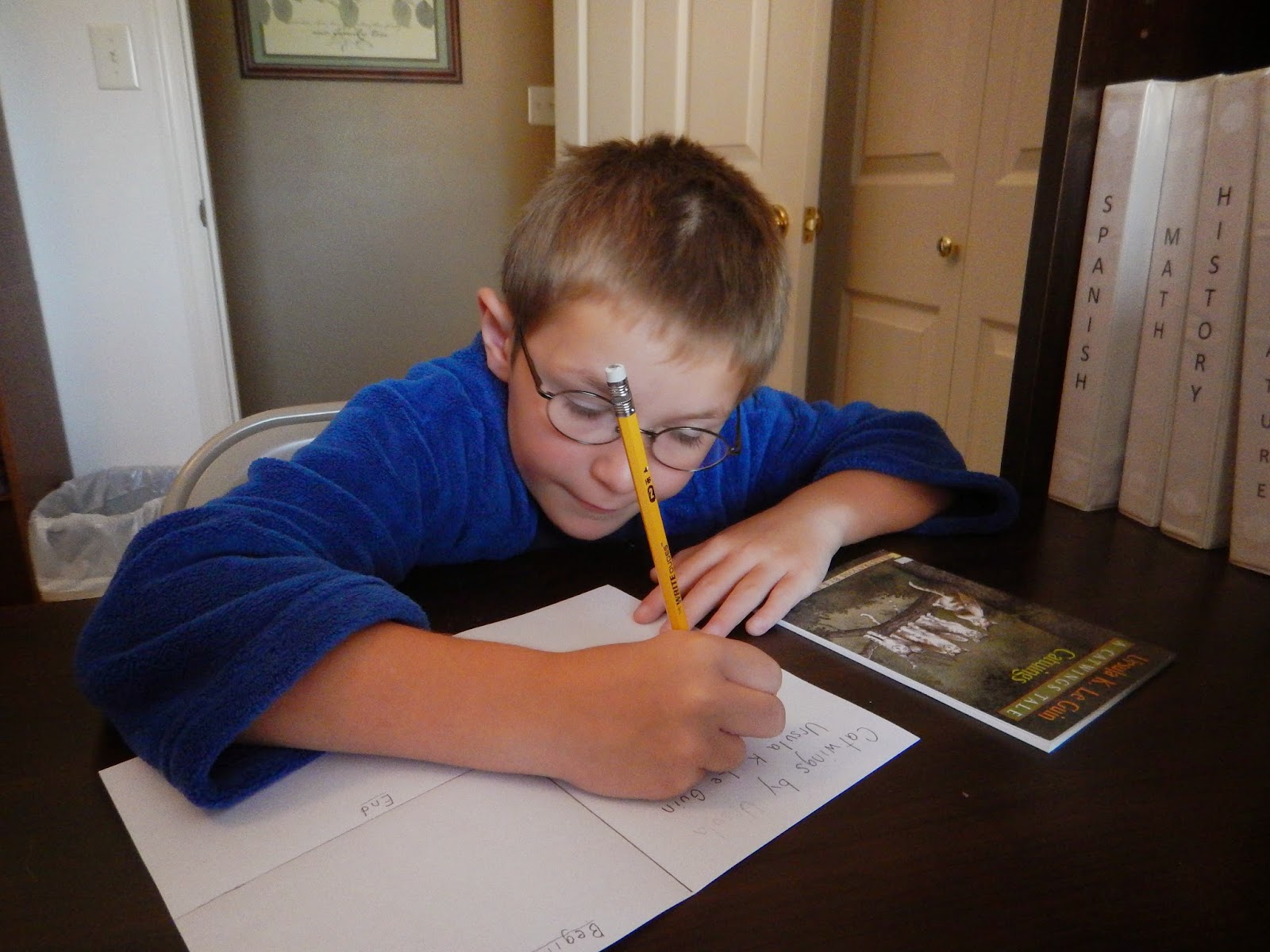 So far, Samuel is still loving his "new school" as he calls it.  He told me the other day, "Mom, school is so much fun.  I look forward to it every day."  I'm sure that attitude will come and go, but it made me happy that he's at least having fun right now!

We started back to school on July 14th.  We only did 3 days of school this week, because we had some fun things scheduled on the other days.  Samuel told me over and over how much he enjoyed school.  In our Bible time, we've been memorizing Proverbs 2:3-5 and discussing how we must be persistent in seeking after God.  In history, we have been reading about Christopher Columbus and his trip to the New World.  We did a landscape painting of the sea, following detailed instructions of what colors to mix and how to paint in the foreground, middle ground, and background of the painting.  Samuel loved this activity! 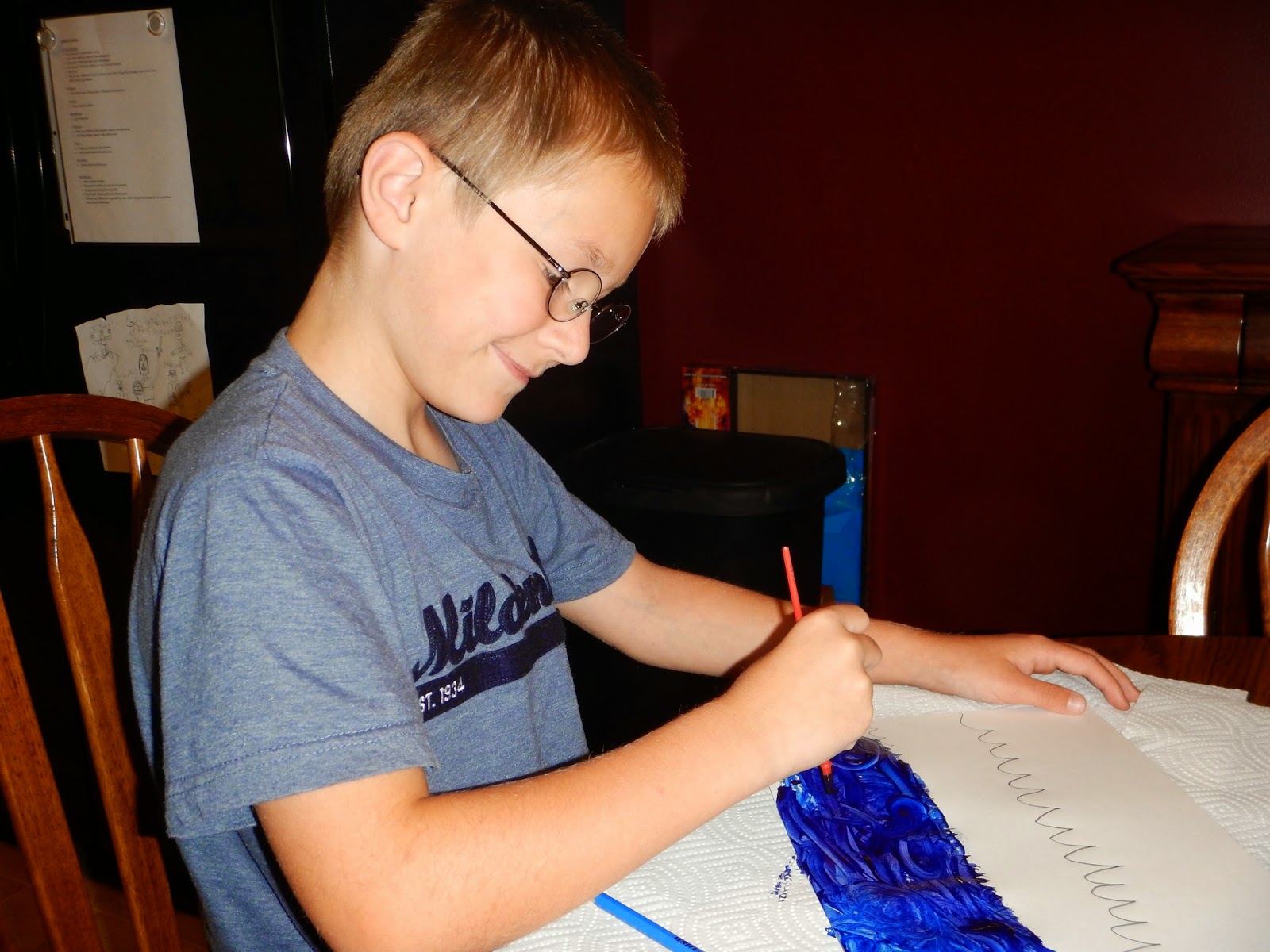 Samuel painting the foreground with the lightest shade of blue. 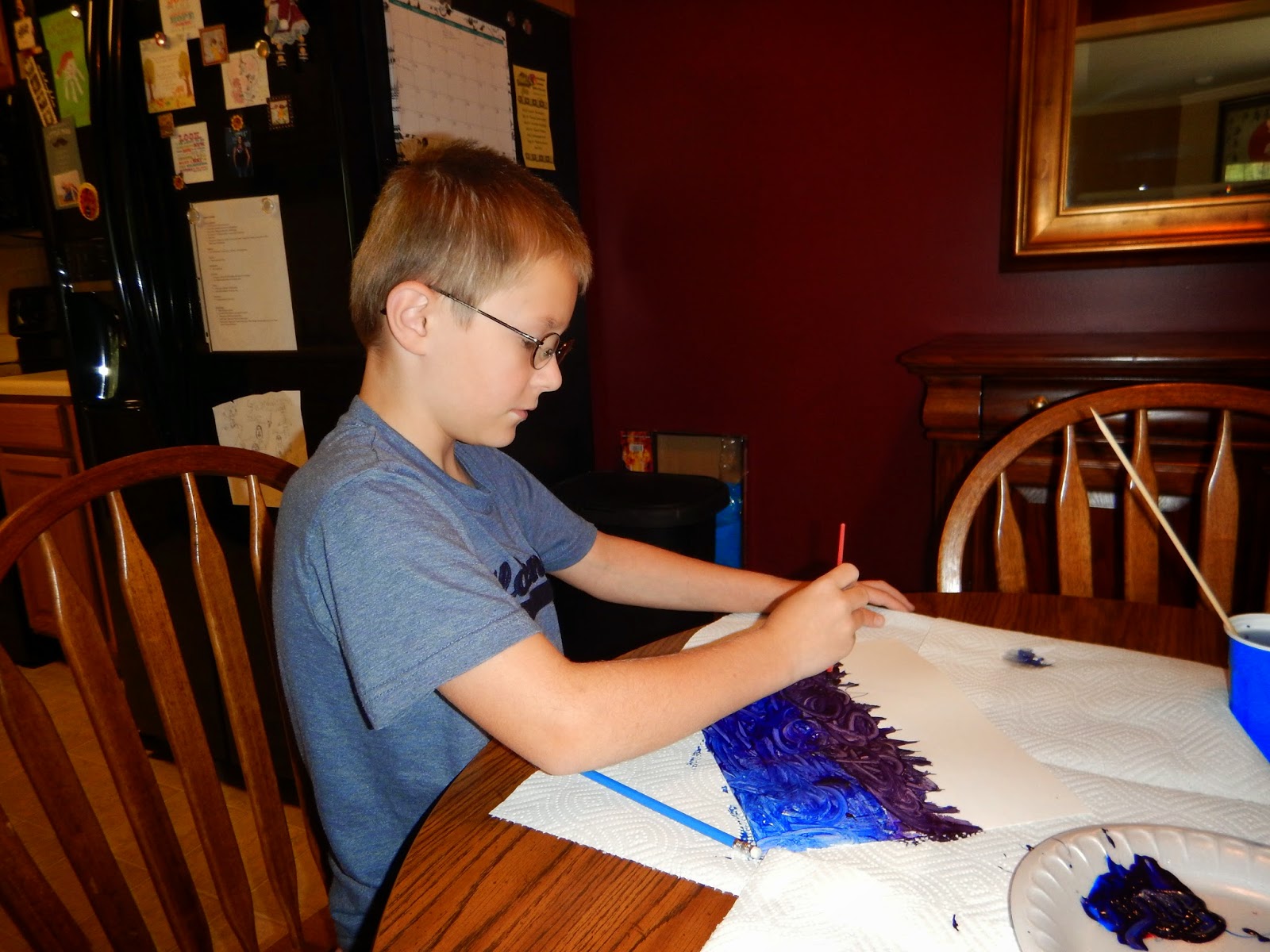 Painting the middle ground with a darker shade of blue 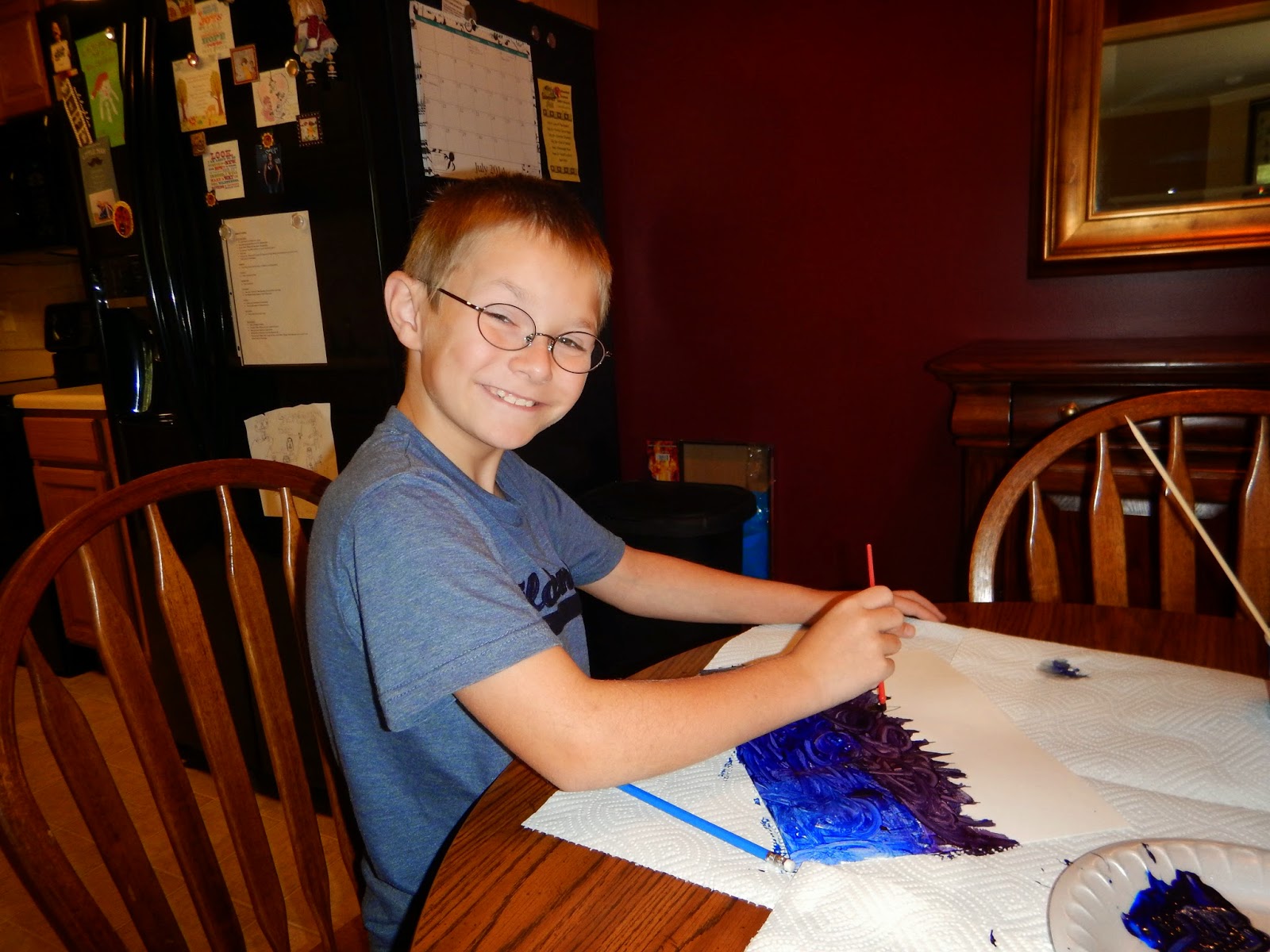 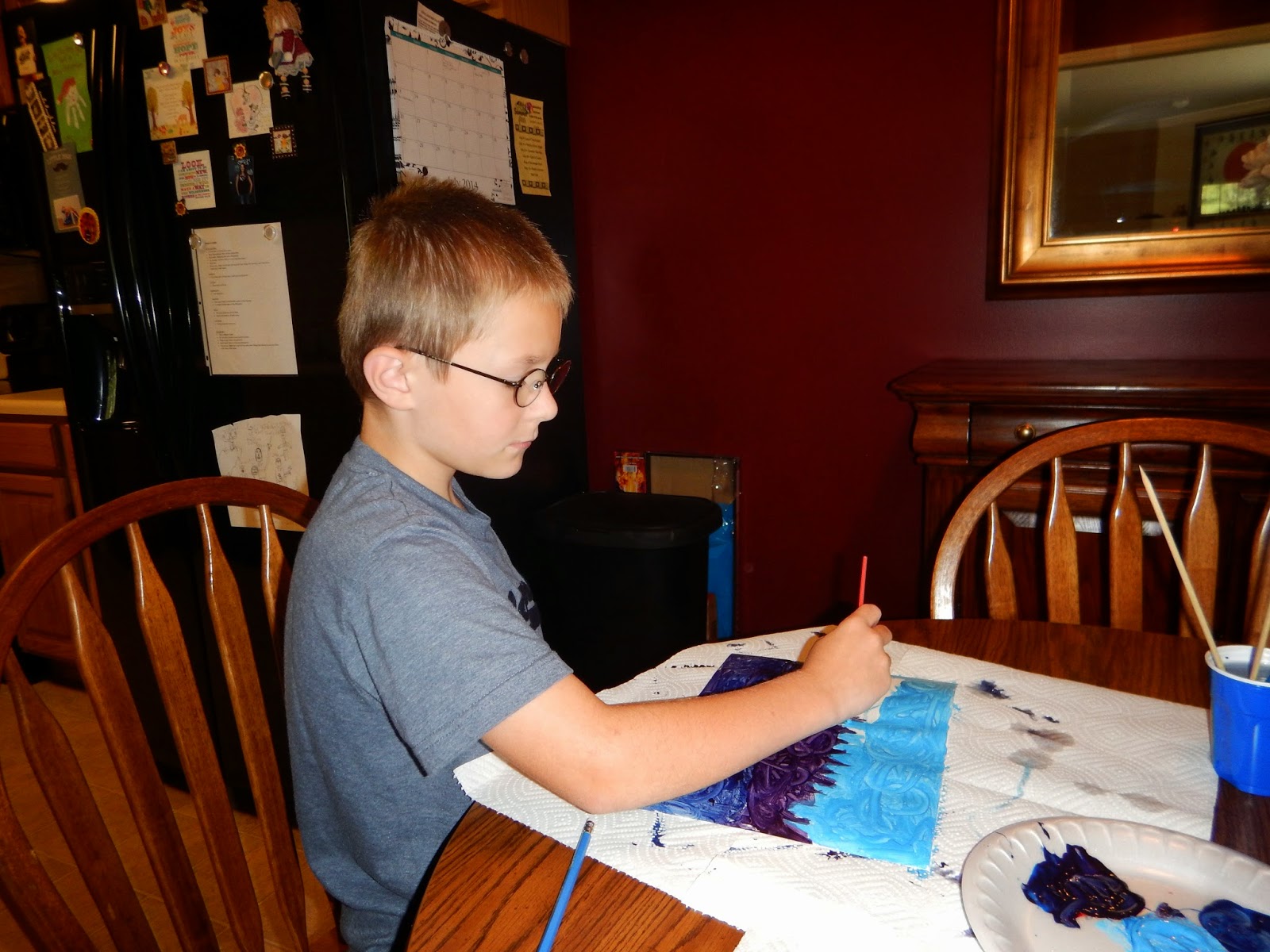 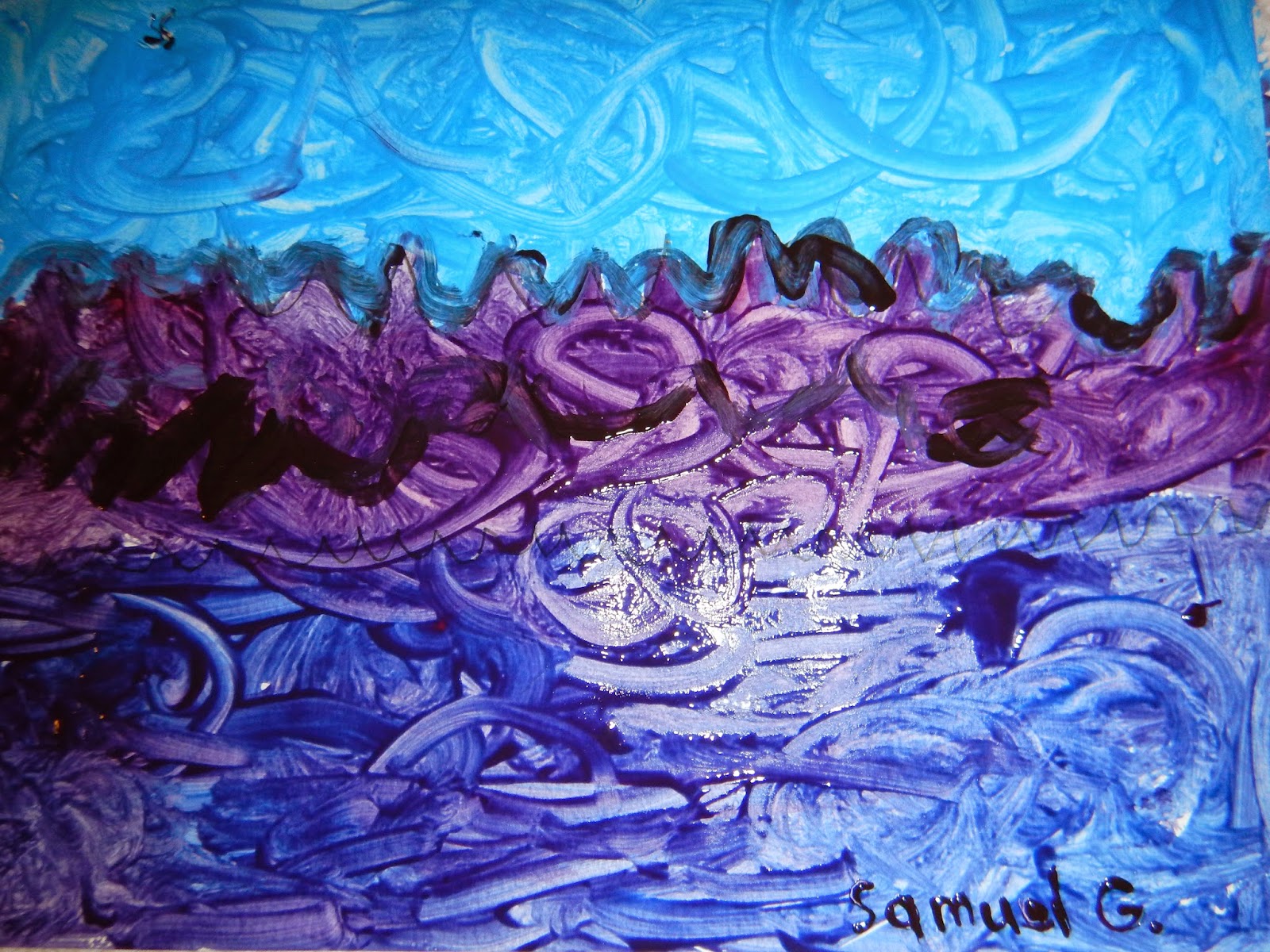 In science, we are going to be studying the seashore, and this week we specifically began learning about the tides.  We watched a great documentary on Netflix (The Blue Planet: Episode 7) that brought to life what we were studying and showed how many animals and plants are dependent on the tides. 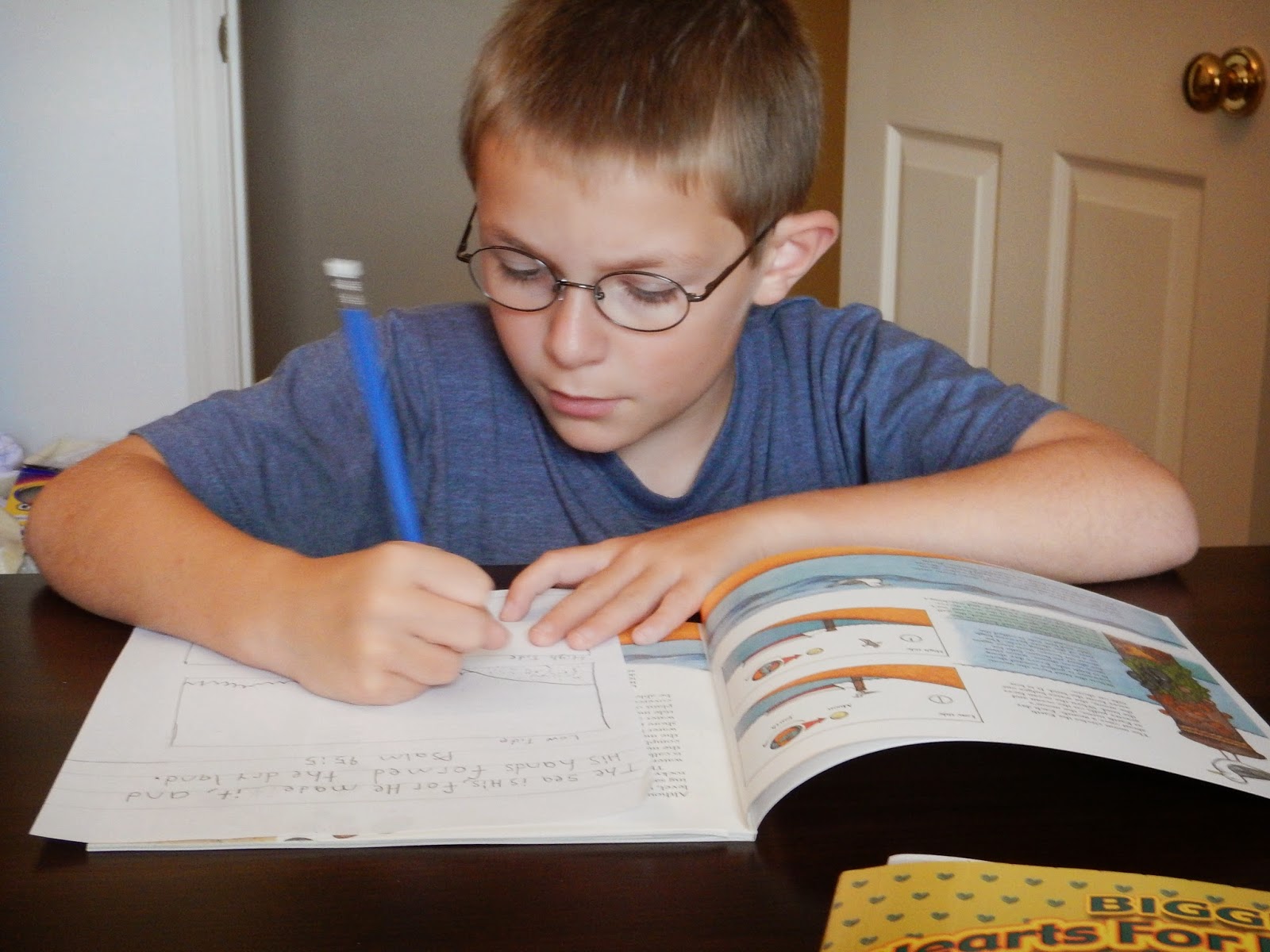 Copying diagrams of high and low tide from the book 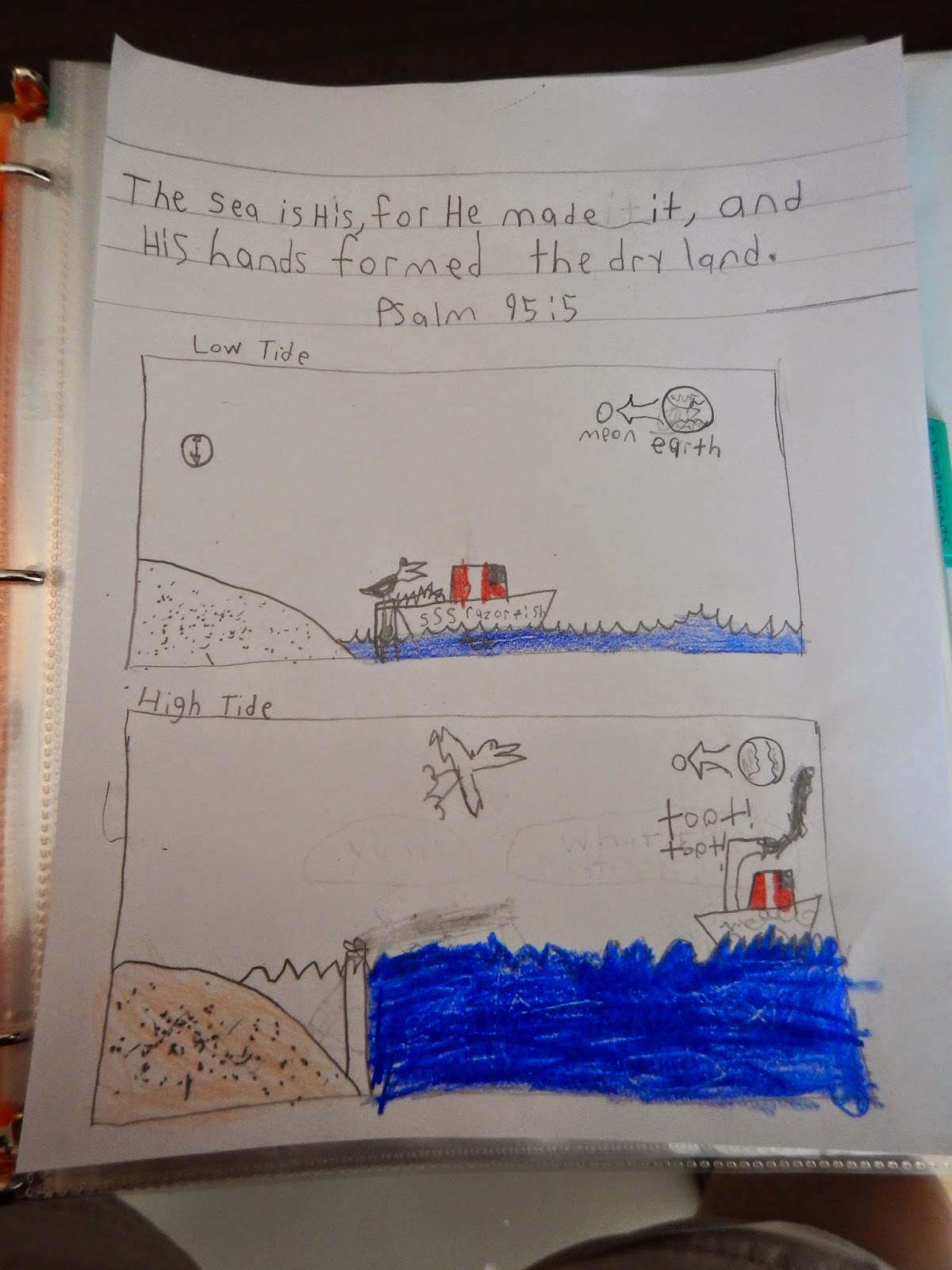 We also did a science experiment to see why some things float and others don't.  Samuel loves any type of experiment so he had a lot of fun that day. 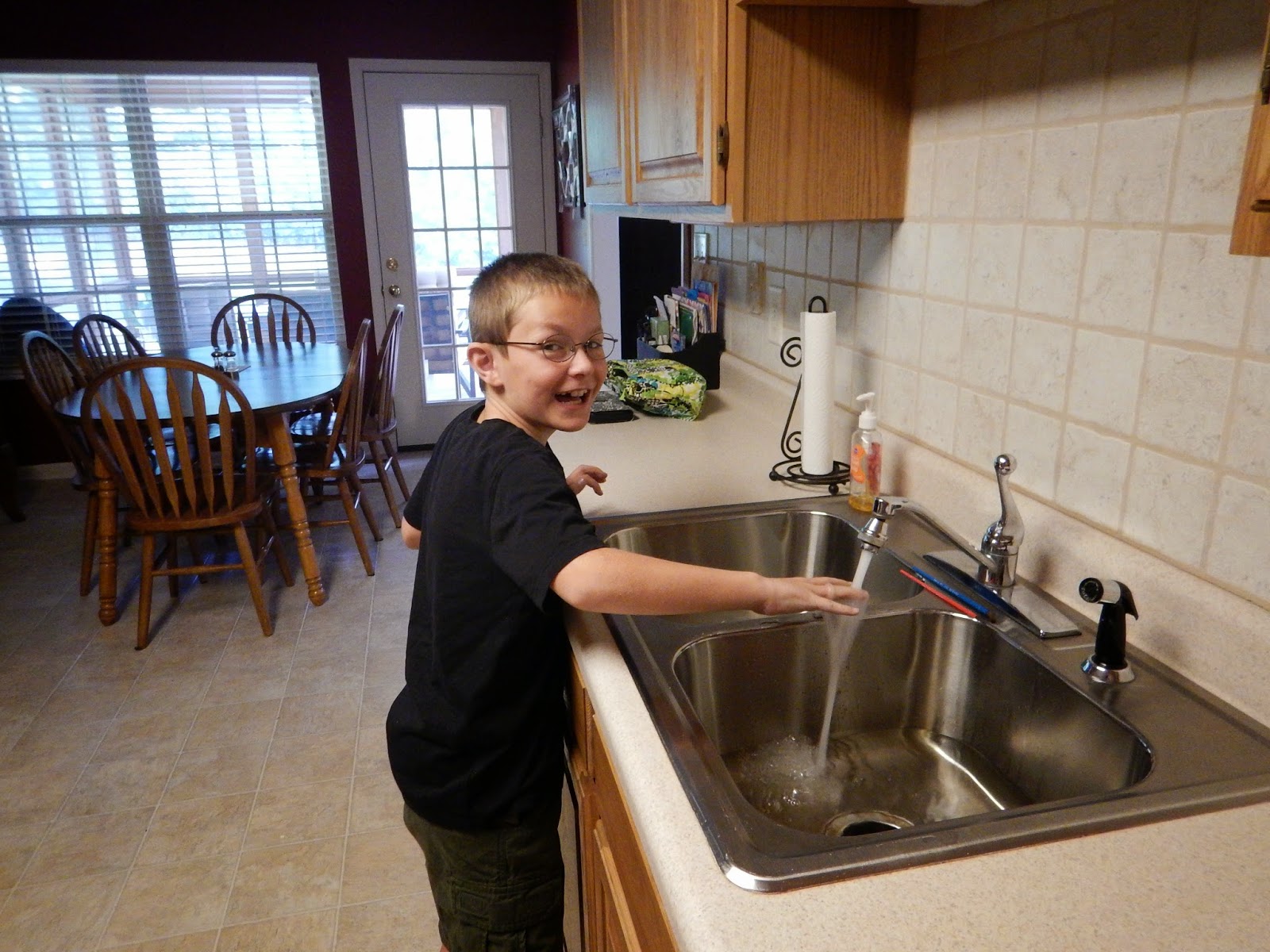 Filling the sink with water... 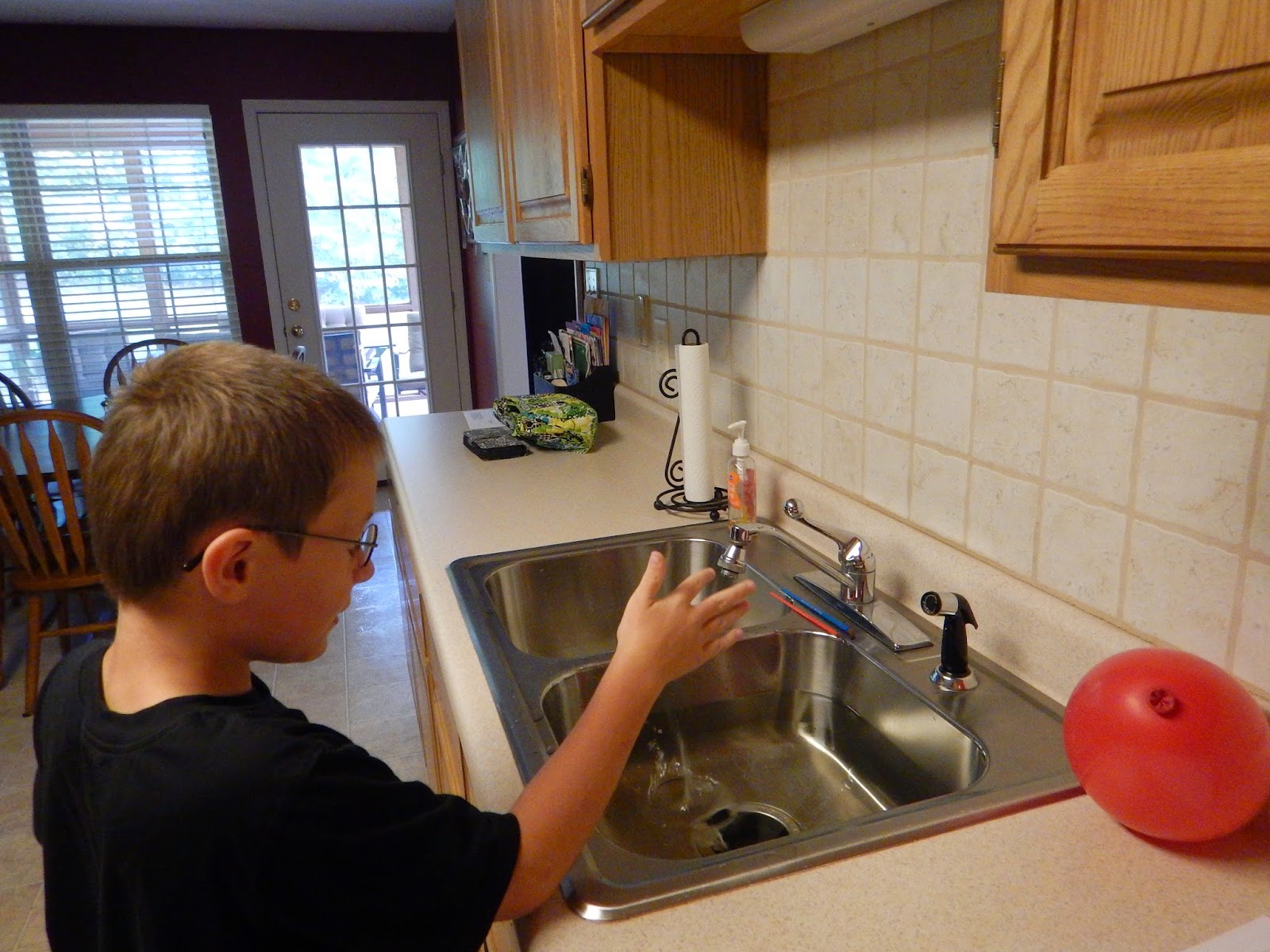 dropping a coin and watching it sink 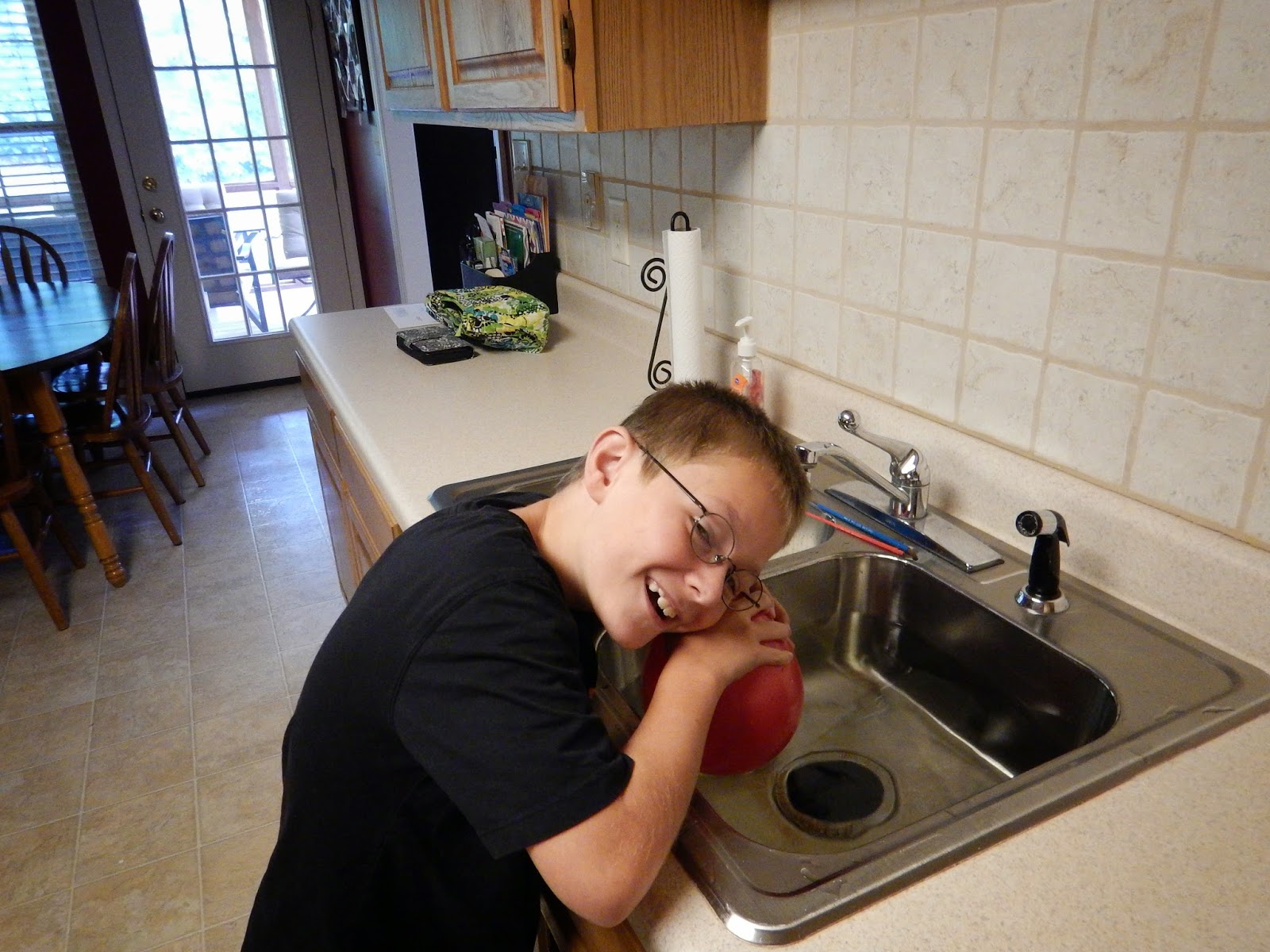 Being silly...he was supposed to be trying to push the balloon under the water 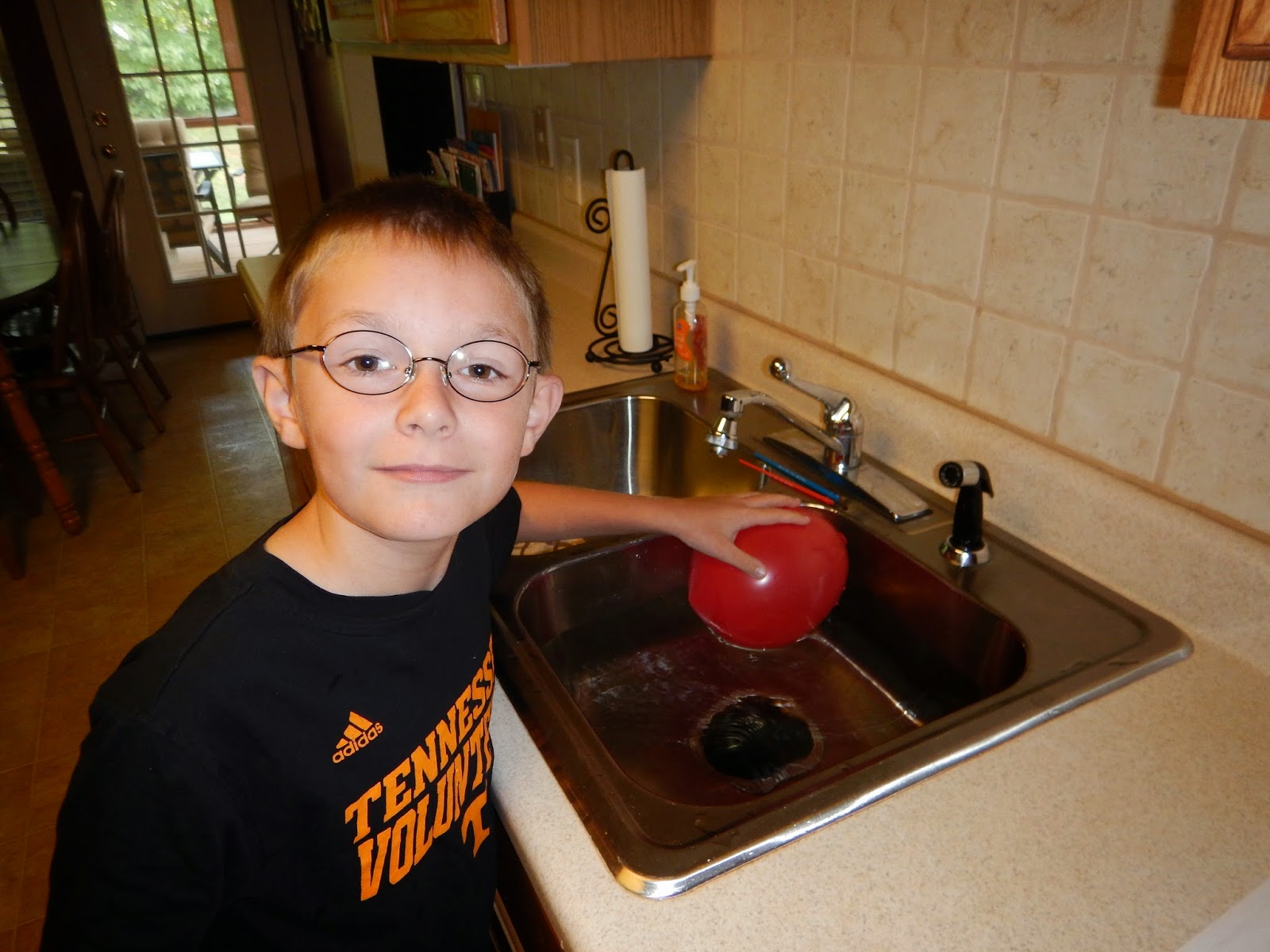 Being more serious..feeling the water push back against the balloon 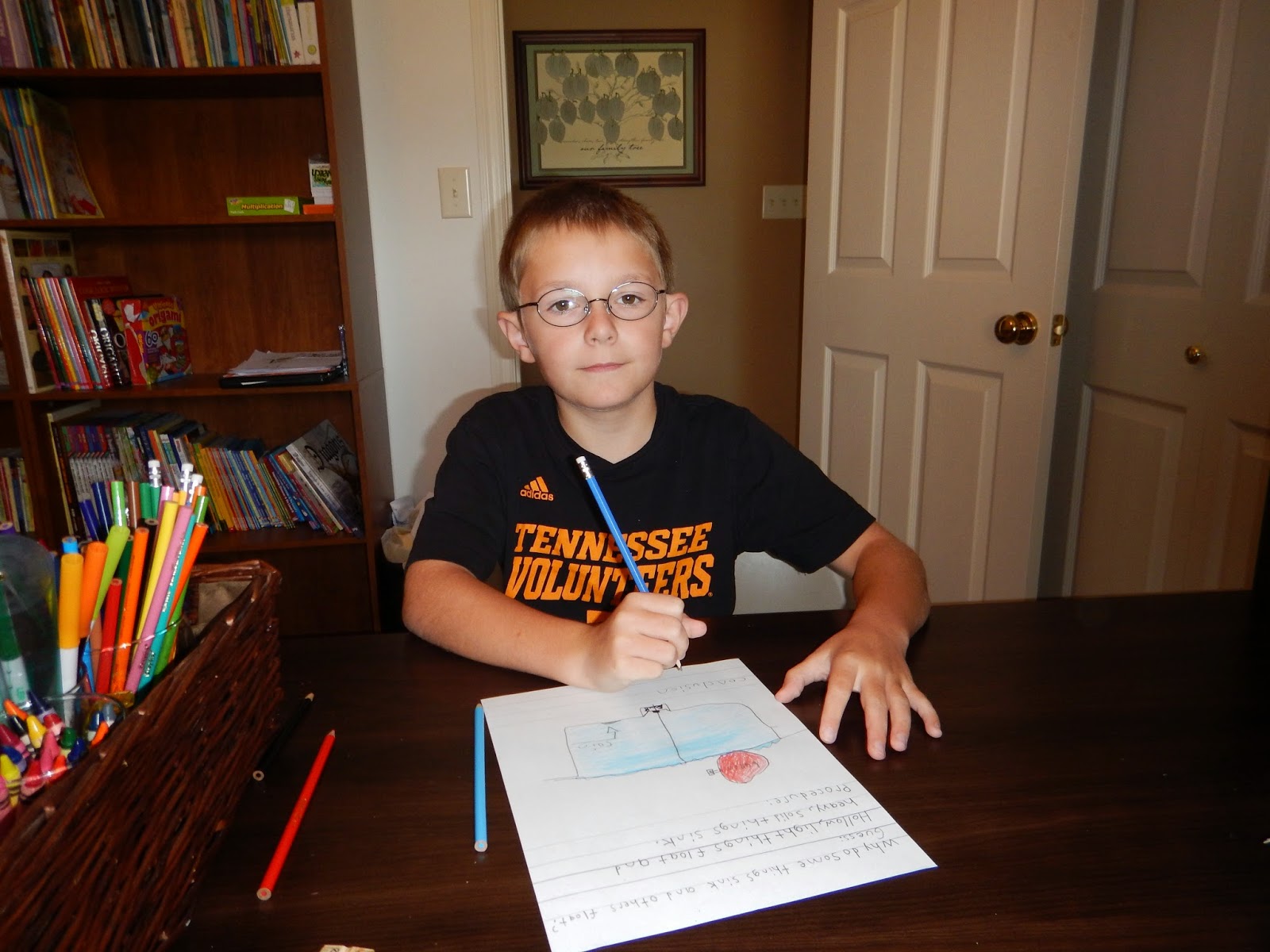 Working on his notebook page describing what happened. 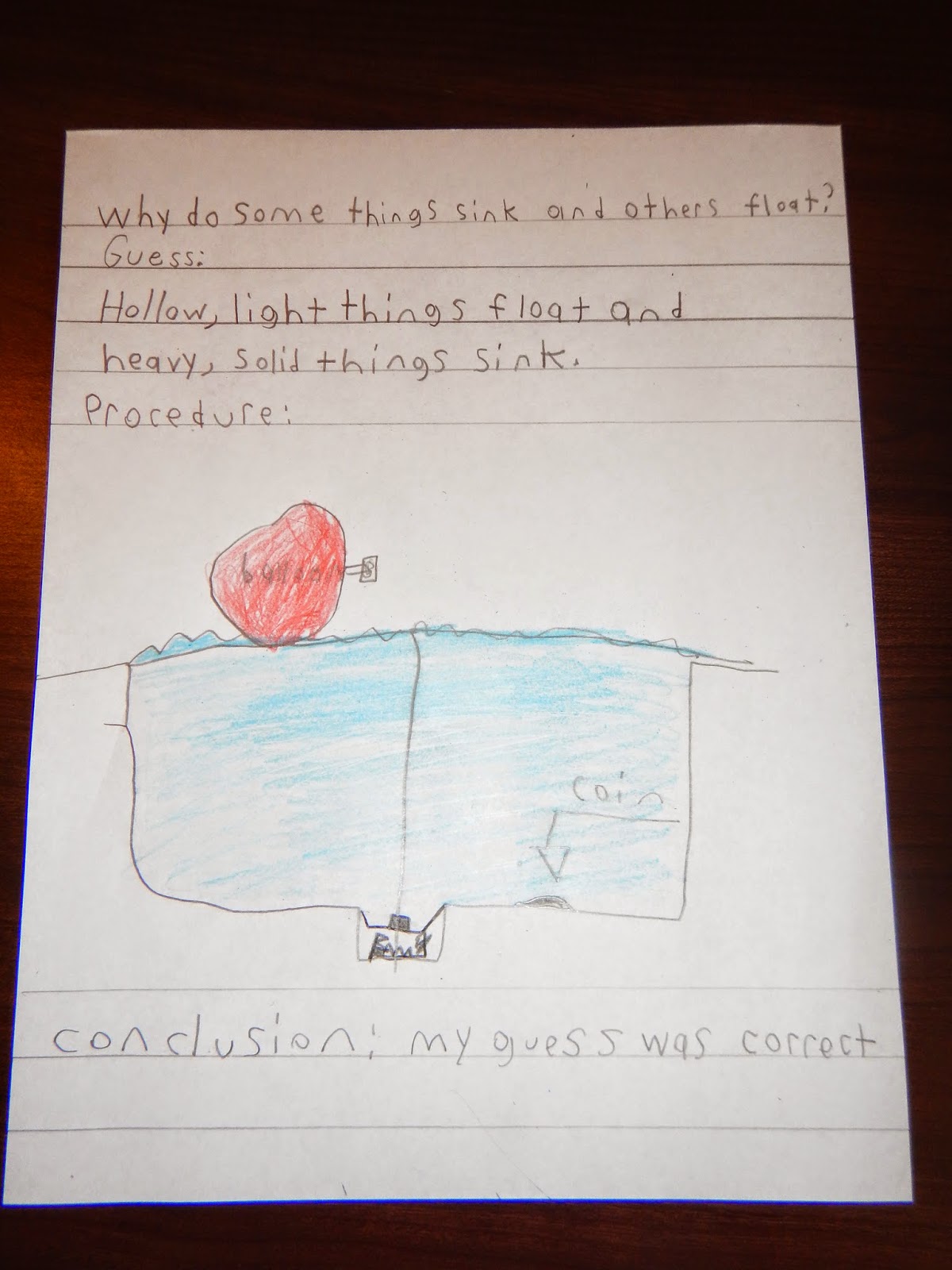 We also started reading George Rogers Clark for storytime.  So far, Samuel has really enjoyed this book.  Especially since the last chapter we read involved a secret tunnel and catching a thief!

For Drawn into the Heart of Reading (DITHOR) we are finishing up Fantasy since that's where we ended last year.  He is reading Catwings and is almost done with it.  Next week, he will begin working on his end of book project.

So far, our year has been off to a great start!

Samuel is now in 4th grade!  Here is a list of what we are using for school this year:

I also have a couple of critical thinking workbooks that I throw in a couple times a week, but Samuel thinks they are fun and not school :)

We are planning on starting our new school year July 14th and I hope to get back to posting weekly updates on my blog, so stay tuned!

We are Adam and Stephanie. We have been blessed with our son, Samuel, through the miracle of adoption. Have fun reading about our lives in the shadow of the Great Smoky Mountains. We love to know who is reading our site, so please feel free to leave comments!